My Vegetable Garden is Starting to Get Happy!

This year I planted the vegetable garden two weeks before Easter.  Three weeks ago I side dressed the plants with ammonium nitrate and it is starting to get happy. Yep, that is the same stuff Timothy McVeigh used to blowup a building. It is pure nitrogen with a number rating of 34-0-0. It really gives the plants a boost, as they go into fruit production. It also put the weeds into a growth spurt. Last week I left town without having time to weed the garden. I fully expected to come home to a jungle. To my great fortune, my wife spent one of her off days weeding the garden. It looked fantastic when I got home.

I am growing cucumbers, tomatoes, zucchini, bush beans, bell peppers, watermelon, and cantaloupe this year. For the second year in a row, the zucchini has performed dismal. This is unfortunate since my wife and I love to eat it. I doubt I will plant them next year. This was my first year to plant bush beans, watermelons and cantaloupe. The beans have produced several meals already. Right now the watermelons and cantaloupe have lots of blooms and are starting to spread everywhere. Thankfully, I gave them plenty of room.

The last two years have produced rather small bell peppers. This year I consulted with a local vegetable garden expert  about getting more size to my bell peppers. After some discussion of possible reasons, he suggested I try adding more fertilizer when I first plant the peppers. That did the trick. I am now picking grocery store quality bell peppers.

My wife loves to eat cucumber and tomato salad. Last year the garden produced a lot of cucumbers and tomatoes. The problem was by the time the tomatoes were ripe enough to pick, the cukes had played out and withered away. This year I adjusted my planting time by planting the cukes a few weeks later than the tomatoes. I am happy to report both are producing at the same time this year.

Below is a picture taken this week of our happy vegetable garden. 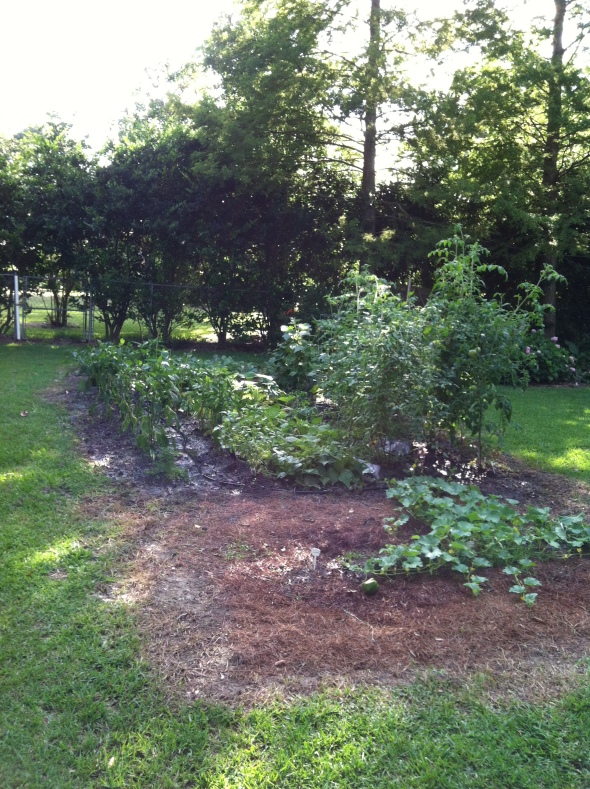